लोक सेवा आयोग
The Public Service Commission (Lok Sewa Aayog, लोक सेवा आयोग) was established on June 15, 1951 (Ashad 1, 2008 BS) following the country's democratic transition in 1951 (2007 BS), with the objective of appointing civil servants from distinct and independent organizations. Since its inception, the commission has been working to select suitable candidates for the civil service posts. The Public Service Commission is constituted under Part 23 of Nepal's Constitution.

The central office of Lok Sewa Aayog is located in Anamnagar, Kathmandu, Nepal.

The Constitution of Nepal provides that the Public Service Commission shall conduct a written examination for the posts of Civil Service, Nepal Army, Nepal Police, Armed Police Force, Nepal and other federal government services. 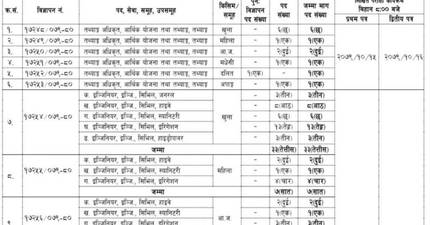 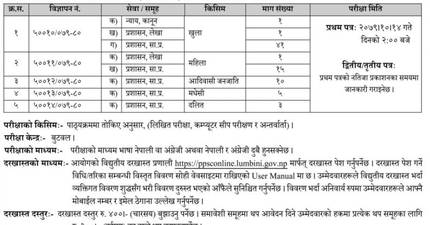 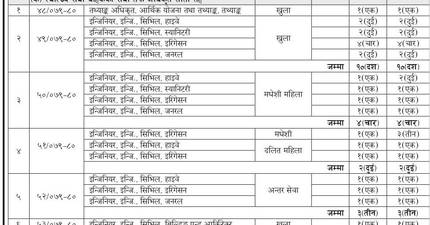 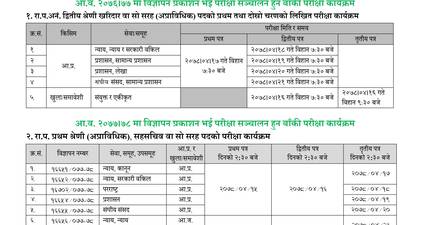 Postponement of Examination of Kharidar From ​Lok Sewa Aayog 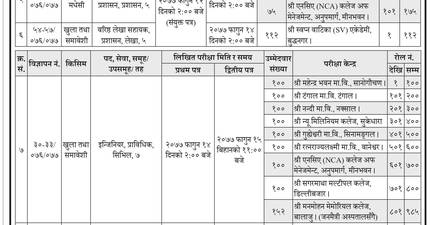 According to Article 243 of the Nepal Constitution, the Public Service Commission is responsible for conducting an examination to identify suitable candidates for public service appointments. In the same article, it was stated that "civil service post" does not refer to the military, Nepal Police, or Armed Police Force, service personnel postings in Nepal, or civil service posts other than those listed in the Act.

Apart from the civil service posts, the Public Service Commission will be responsible for conducting written examinations for the posts of Nepal Army, Nepal Police, Armed Police Force, Nepal, other federal government services and organizations.

In addition to these duties and responsibilities, there is a provision to consult the Public Service Commission on the following issues:

Selection Process of Candidates by PSC

According to the Public Service Commission Act, 2066, the Commission will select suitable candidates by one or more of the following methods:

D) Other methods prescribed by the Commission.

After receiving the demand from the concerned body to fill the vacancy, the Public Service Commission determines the number of posts to fill the vacancy as per the relevant law. After determining the number of positions, the website of the Commission publishes a weekly bulletin and an advertisement in the Gorkhapatra national daily. Applications are invited with 21 days for the open internal competitive examination and seven days for the double fee. After the advertisement for the available and internal competitive analysis is published, the online application for the advertised post is collected from the Regional Directorate, Zonal Office, and Application Management Center of the Commission. After scrutinizing the applications received for the advertised positions, the candidates are issued admission papers to join the examination.

To maintain fairness and accuracy in the selection process, the Commission has adopted a policy of neutrality by adopting a system of question paper preparation, question paper modification, examination of answer scripts, conducting interviews and written reviews, and officials involved in interviews not knowing each other.

While performing these tasks, the question papers required to examine the service group and post will be sent to the concerned subject proficient, and the set of question papers will be received in a confidential, sealed manner. The set will be given a separate code number, and a collection of question papers selected based on the code number chosen by the Hon'ble Chairman of the Commission will be used during the examination.

In all the answer scripts received after conducting the written examination, the examination leading branch has the practice of keeping the first code and assigning the second code to the officer of any other branch, thus maintaining the highest secrecy in the examination. Therefore, the answer sheets received after the second code are sent to the experts in the respective subjects specified by the Hon'ble Chairman for testing. The result of the answer sheets received after the test is tabulated, and the result is published by decoding based on code. Candidates selected for the interview are interviewed with the involvement of experts in the relevant field, and the marks given by one are given in secret so that the other cannot see them. Such a score is opened only at the time of the candidate's qualification and recommendation. In addition to this, the marks obtained by the candidate in the written examination are sent only during the qualification order and recommendation so that it is not known during the interview.

The Public Service Commission has been updating the list from time to time by the concerned branch for the work of the Commission, including the preparation of question papers, revision of question papers, examination of answer scripts, interviews, psychological personality tests, curriculum development. The Commission secretly assigns them to a particular type of selection. The Commission has already started screening tests in specific posts in which candidates are more involved. From this, only those who have passed the preliminary examination can be involved in the main examination.

After the final selection of the candidate through open competition, if there is a civil service post in the Gazetted post for an appointment, it is recommended to the Ministry of General Administration and if it is a post under a separate Act, to suggest such office in case of Gazetted unnumbered post. If a candidate chooses the same office, they should be recommended first. When sending a letter of recommendation to the concerned body for an appointment, one copy of the application form of the concerned candidate and copies of the accompanying certificate should be sent.

In the case of security agencies and other government services/organizations, the work from determining the percentage to conducting the written examination is done according to the earlier procedures.

The Chairperson presides over the meetings of the Commission, coordinates the work assigned to the members, and gives policy direction. The Secretariat of the Commission has a Gazetted Special Category Secretary as the Executive Chief.

Functions of the Secretariat