Kathmandu, April 13, 2017: Wai Wai Glocal Teen Hero is an initiation by Glocal Khabar (a concern of Glocal Pvt. Ltd.) to bring out the teenagers who are doing something from the shadows and create a ripple effect of motivation and impart a message that a lot can be done by anyone and also to appreciate and recognize the teenagers. It is a platform for teenagers to share their initiation, creativity, and enthusiasm which will then motivate them and more of the other teenagers in the nation to develop an entrepreneurial thinking.

This is the third year of the first ever program designed in the country to recognize dedicated, passionate, and innovative teenagers so as to encourage their initiatives. Bipana Sharma, a 17-year old child rights activist from Sunwal, Nawalparasi, and Shantosh Lamichhane, a young scientist were felicitated with the First and Second Glocal Teen Hero awards in the years 2015 and 2016 respectively.

The aim for this year is to reach the teenagers nationwide to provide them the platform, for which the Glocal team accompanied by Teen Hero from the last year and a jury member will be going to various sixteen destinations including Dhangadhi, Mahendranagar, Nepalgunj, Tulsipur, Baglung, Butwal, Bhairahawa, Janakpur, Jhapa, Biratnagar, Lahan, Banepa, and Pokhara apart from the Kathmandu Valley. The main objective of this initiative is to bring out teenagers from different parts of Nepal.

This year, Glocal has partnered with Wai Wai, Coca-Cola, Panchakanya Group, Toyota-VOITH, Honda, QFX Cinemas, and Landmark Education. Soaltee Crowne Plaza is the official hotel partner for the event. Nepal Tourism Board, European Union, UNDP and National Youth Council are the strategic partners, and the initiation is in support of Sustainable Development Goals with the slogan "Teens for Sustainable Development Goals". Qatar Airways is the airline partner. Sparrow is the SMS partner. Facts, Code for Nepal, IMS Group, YUWA, AYON, Leo, Restless Development and KGH Group are the supporters for the program. The Grand Finale and the award ceremony of the event would be live broadcasted on AP1 HD Television.

Cajol Jha, Manager, Public Relations at Glocal Pvt. Ltd and Coordinator for Wai Wai Glocal Teen Hero, speaking amidst the press release ceremony for the award shared that they are glad to be associated with these renowned and prestigious organizations to continue the legacy.

“We initiated Teen Hero award just to show that teenagers also have a lot of capacity and are doing significant things that can benefit the society and at large nation. They lacked a platform to showcase what they have achieved and we are satisfied that we are able to make progress on providing that to the teenagers” said Asish Thakur, Executive Director of Glocal Pvt. Ltd. 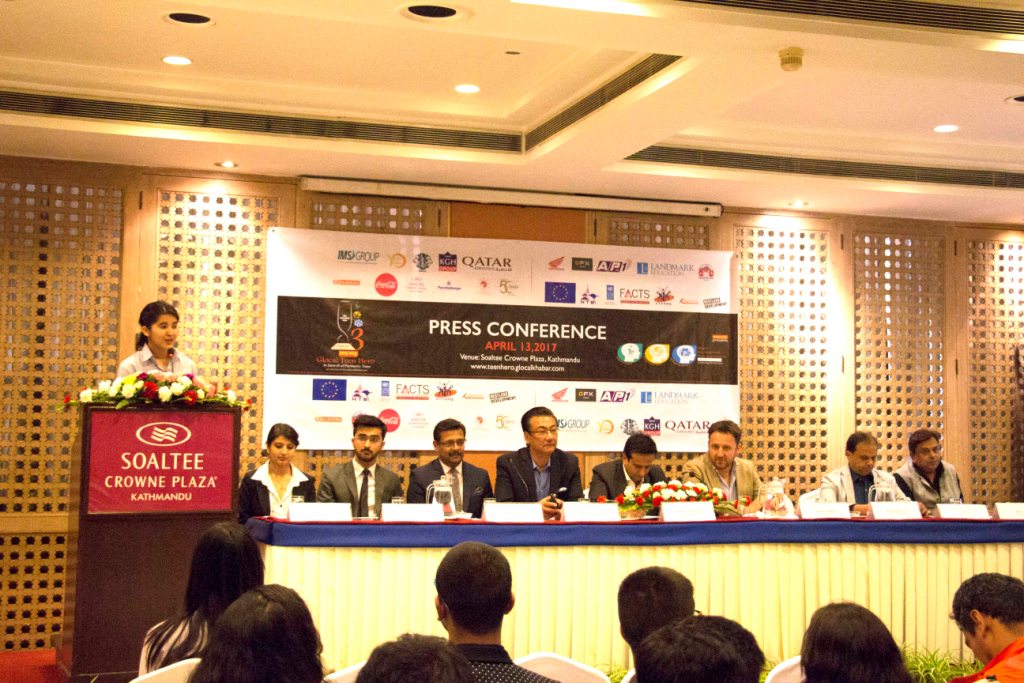 Top 6 finalists will be shortlisted for the final round of the Wai Wai Glocal Teen Hero on the basis of initiation and the impact of their work, and then the finalist will be interviewed individually to measure their personality, domain knowledge and vision. It is a platform for Nepali Teenagers aged 13-19 years who are involved, initiators and achievers besides their school/college curriculum.

Award ceremony of the Wai Wai Glocal Teen Hero will be held on 1st of September in the presence of 250+ personalities of Nepal from different walks of life, such as diplomats, politicians, film stars, entrepreneurs, youth leaders and many more.

Application for Glocal Teen Hero this year opens on April 14, 2017. The application is free and can be filled online at www.teenhero.glocalkhabar.com

Similarly, on 1st of September 2017, Glocal is to initiate the first ever international conference for teenagers in Nepal, Wai Wai presents Glocal International Teen Conference (GITC). GITC is an opportunity for teenagers to authentically address issues that are important to them without having to overcome generational barriers. The conference will showcase the ideas, experience and stories of the teenagers from countries like Afghanistan, Bangladesh, Indonesia, Liberia, etc. through the series of panel discussion. The panel majors on Entrepreneurship, Empowerment and Socio-Perspective.

The main objective of this conference being the platform of the Global Teenagers Meet and to set an example of teenagers who have worked in countries with more difficulties and spreading a positivity that things are possible with efforts.

It is a platform for knowledge and experience where teenagers can learn about leadership, empowerment and social impact through a participatory and interactive environment with their peers from all over the globe.

The conference will be followed by the Grand Finale celebration of Wai Wai Glocal Teen Hero award.