Samriddhi School celebrated the success of Plus 2 students in the Kaleidoscope 2020 organized by Ace School. When people talk about the holistic development of students, Samriddhi School believes in delivering it.

The students of Samriddhi School proved it in Kaleidoscope events in different categories came out as a winner holding the first prize such as Smriti Maharjan, XI ‘G' in 'Painting', Rohan Shrestha, XI ‘J’ in 'Sketching', followed by Sonam Rai, XII ‘B’ won two titles in Poetry and Short story. On the other hand, in the category of 'Dancing', in 'Solo Dance' Kanchan Sharma, XII ‘F’and in the 'Dance team (Ashish Theeng, Kabeer Gurung, Shital Rawal, Anjana Tamang, Matina Maharjan, Salomi Dahal, Selina Gurung, & Swastika Karki)' received the first prizes in their respective categories. As for the category 'Mr. Kaleidoscope', Nishan Rajlawot,XII ‘D’ succeeded to hold the first prize as well. And, in the other remaining categories of Kaleidoscope events such as  in the 'Travel Video' category, Saswot Shrestha, XII ‘F’ became the first runner up, whereas both the team of  the Basketball(boys) and the debate entitled themselves as the first runner up. 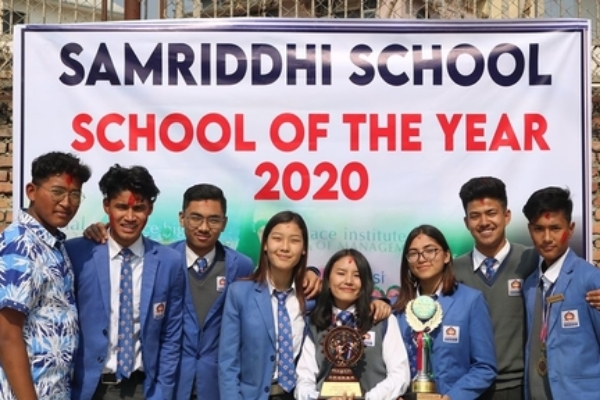 Thus, with the achievements in categories in the Kaleidoscope event, Samridhi School was able to entitle itself as the “School of the year 2020”. Besides Kaleidoscope, the school also celebrated the success of their students in the following events happened recently: Miss Popular (Event: Face of the College) - Riti Shrestha, XII, first runner up in 3rd National Ski Championship – Isha Theeng, XI ‘D’,  first runner up in Futsal Competition – 5th HISSAN Valley-wide Sports Week, first runner up in Futsal Competition – Mid Valley Cup Inter-college Hospitality Cup and Second Runner up in Under 18 Basketball Championship.