Sign in Sign up
Find the right program at the right institution.
Apply for Bachelors
Apply for Masters

Tough Exam or Weak Students: A Lesson From CEE 2021

In the recently published results of the Common Entrance Examination (CEE) of the undergraduate level (MECEE-BL) in various medical programs, a gap in the seats allocated for the programs and the actual number of students who passed has been visible.

While the candidates clearing the entrance exams of programs like MBBS, BDS, BASLP, BAMS, B Optometry, and B Perfusion Technology are more than double the allocated number of seats, six programs have almost half the allotted seats empty as the required number of students did not clear the entrance examination. The programs in which such a situation is faced are, BSc Nursing, BSc MLT, BSc MIT, BPT, B. Pharma, and BPH. 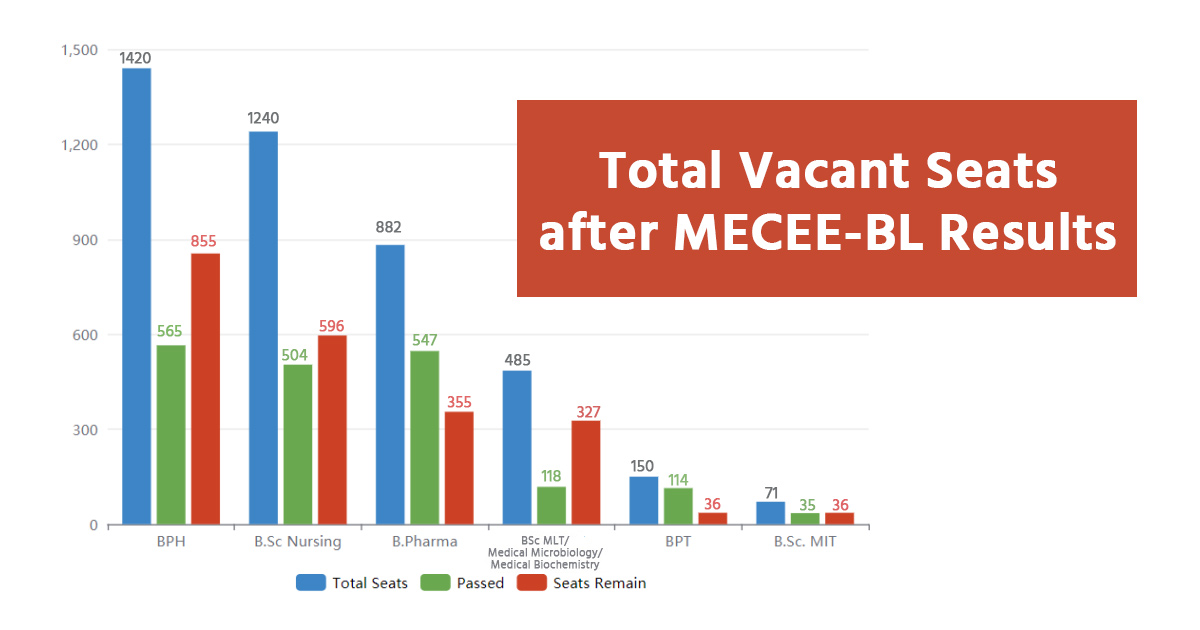 There is another important picture that needs to be kept in mind when analyzing the results. The list of total applicants far exceeds the available seats in every program. However, in the six programs mentioned above, less than half the allocated seats have passed. This raises yet another important question regarding the gap between students' command of the subject and MEC's entrance questions.

The commission is clear on the provision that even if the allocated seats go unfulfilled, only those who clear the entrance examination will be accepted in the programs. However, the commission is yet to decide on what to do with the vacant seats. A probable approach would be a second entrance but the commission has not reached any decision as of yet. The commission is also of the view that the results are as such because of the weak standing of students in those subjects. Previously MEC had denied allocating seats to many of the colleges offering BSc Nursing programs citing a lack of proper infrastructure. This so-called well-planned allocation as such should not have exposed huge gaps in allocated seats and no of students clearing the entrance. However, with this MEC's study and planning does not look to be in line with the reality on the ground. This poses a big question as to how effective is MEC's planning and also raises concerns regarding the quality of the country’s secondary education as a whole.

Nepal’s education sector has been one of the hardest-hit sectors due to the country’s political and economic as well as leadership crisis. Experts in the field believe, the sector has not been able to deliver the promises made by the stakeholders at various points in time.

A major challenge that exists in the educational sector of the country lies within policymaking, the system that largely adheres to the donor interests through the direct influence through stakes in educational policymaking. The inclusion of donor as well as private interests in national policymaking leads to yet another systemic challenge, where evidence-based policymaking comes under the heat. Experts often cite the dearth of research-based evidence to assist policymaking while others point towards utter ignorance of the officials at policymaking. In such a scenario it is not unknown that the education system has not been able to provide quality education while all the policies have focused on increasing the number of enrolments. The very shortcoming that experts everywhere cite has also riddled the higher education system. The quality versus quantity debate within secondary education is always a matter of debate among the education analysts of the country and their view suggests that due to largely donor and private sector influenced policy decisions, the quality of education at the senior secondary level is always compromised.

Another acute problem lies with the demand for specific programs. Along with the education quality, another factor that highly affects the education system of the country is the job market. In the case of the Nepali education sector, we have not only been unable to provide better quality education to the students, but we have also been unable to ensure better jobs for them. With globalization, job security is better in international markets than in our domestic ones. This has led to disenchantment with programs that do not ensure a large job market for students. The limitation of the job opportunity creates insecurity among students regarding the degree programs as they figure that limited job opportunity means a lesser chance for them to secure jobs.

Another rationale that can probably help explain the anomaly is the affiliation process of the country’s medical education system. Even though the National Medical Education Act 2019 of the country has set strict criteria for granting affiliation to colleges offering all sorts of Health Science degree programs, the malpractice within the system hasn’t been abated. As the medical colleges across the country are granted affiliations without proper regulation, there will be an increase in the number of medical programs offered throughout the country. This increases the gap between the expected number of candidates per program and an actual number of candidates interested to enroll in such programs. The issue also reflects a lack of research and study on the part of the affiliation granting body that prevents them from getting the real picture.

Besides these questions have also been raised regarding the modality of question formation for the entrance examination. Especially diploma level students have lamented that MEC has neglected their syllabus while preparing entrance questions putting thousands of students' career paths at risk. Addressing the discrepancies, MEC spokespersons have time and again stressed that all the steps that have been taken have been for the sake of improving the quality of medical education in the long run. It does however look challenging for MEC to address present concerns and at the same time not let any decision compromise medical education quality.