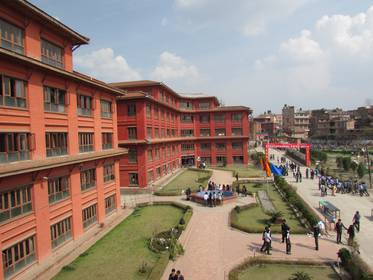 In course of enhancing the students’ academic capability through regular monitoring, KSS conducts various examinations and assignments within an academic year.

Students required to complete the assignments given by the faculty members within the given time frame. A student showing poor performance will be given timely academic suggestions and guidelines and will be informed to parents in timely manner.

An entrance examination followed by an interview is compulsory for all the students seeking admission.

An examinee need to secure minimum of GPA B in SEE. The entrance test covers following 3 subjects i.e. English, Science and Mathematics

KSS grants scholarship and awards to the talented and deserving students from each stream.

The Management committee based on recommendation made by the concerned committee selects the recipients of scholarship and awards.

Situated at the ancient historical and cultural city, Bhaktapur, Khwopa Secondary School has proved itself to be the most influential academic institution in the district run by the leading academicians and enthusiast locals.

Khwopa Secondary School was founded by Bhaktapur Municipality on 16th Shrawan, 2056 (1st August, 1999). Buoyed up with the idea of enlightening the whole society and the nation by means of providing quality education, the municipality made an aggressive initiation realizing their long term vision of the over all development of Bhaktapur. In its decade long history, this instiutition has proved itself as one of the well equipped school with national recognition.

The motto of Khwopa Secondary School is to produce global leaders with sound theoretical knowledge competence and skill. That is why the institution takes every academic year as a new beginning and tries for something that is beyond attainment. The philosophy has always remained to try for something that has never been done or that other have tried and failed. This very essence is backed by experienced professors, visiting subject experts and lecturers.

Along with, we maintain the regular classes, indepth practical assignments, field excursion and report writing which are the recipes for success of each individual student.

One Graduate in One Family

Message from the Chairman

With the goal of ‘One Graduate in One Household’ and the mission of ‘Intellectualization of the whole Society’, the people’s representatives of Bhaktapur Municipality started Khwopa Secondary School and Six other colleges.

The education that our colleges teach will obviously help to enable the students to go ahead with the 21st century and encourage them to contribute the rest of their life to sincere and selfless service to the people and country. These academic institutions will be the models for other local elected bodies of the country.

Bhaktapur city is enriched with art and artifacts handed down by our ancestors. This world heritage city is one of the major tourist destinations of Nepal. It is high time to make the cultural rich city a center of academic excellence.

These colleges including other colleges of Bhaktapur are stepping towards founding Khwopa University in near future, The new generation will enroll here for their higher education as well as for becoming disciplined students and cultured citizens of country.

Message from the Principal

To recognize and respond to the needs of community has been the sustaining mission of Khwopa Secondary School (KSS) over the past years and will continue in the days ahead.

Our goal is to make difference in the lives of the young people who are enrolled in KSS by nurturing them socially and educationally. We maintain rules and regulations of discipline for the good of the students themselves.

The common effort of management committee, teachers, administrative staffs, students and parents has boomed positive growth and granted remarkable achievements to KSS. A long line of dedicated, skilled, hardworking people is working to create history of KSS. We are proud of this people's institution making recognizable landmarks in Bhaktapur.